How to Prototype in a Design Sprint - Meetup

How to Prototype in a Design Sprint - Meetup 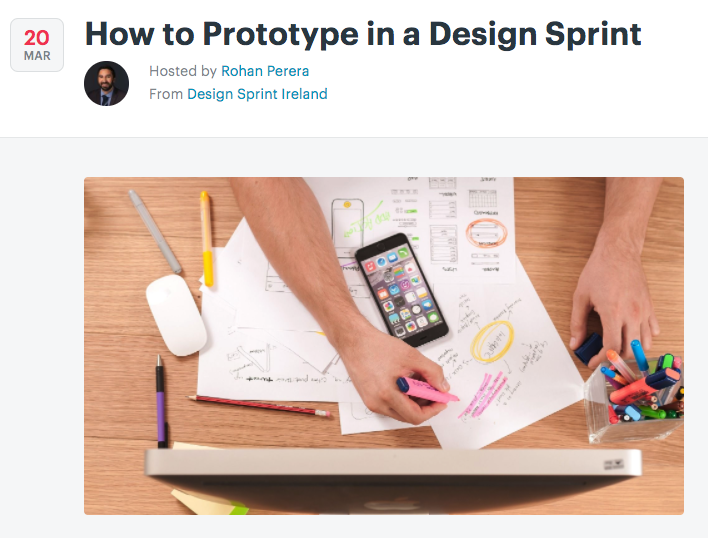 How to Prototype in a Design Sprint

This is the meetup I attended and I wanted to get out a few of the key points and my take on them down.

This is the synopsys:

In a Design Sprint, prototyping day is Thursday. This is where you will create a testable prototype for Friday’s user tests.

Thursday is about illusion. You’ve got an idea for a great solution. Instead of taking weeks, months or, heck, even years building that solution, you’re going to fake it. In one day, you’ll make a prototype that appears real. And on Friday your customers will forget their surroundings and just react!

Prototypes are easier to build then you think. These days, thanks to the internet, there are a crazy amount of easy to use prototyping tools available. Most of them free! In this session, we will show you some of the tools that we use when prototyping and share our experiences of prototyping best practices.

I’ve already listened to the audiobook, “Sprint” by John Zeratsky, Jake Knapp, Braden Kowitz, and that is what this meetup was about.

If you don’t already have an Audible account you can have the book for free:

It’s totally free and you won’t need a credit card if it is your first time accepting an Audible book from a friend.

After you accept the book, you will be prompted to download the Audible app to start listening.

The first speaker Rohan Perera @Rohan_LD, one of the organisers, gave an introduction and his main points were as follows.

What is prototyping about?

Think of it as a façade of the product (or a portion of the product). It is an impression of what a future reality could be like. It’s all about learning, good and bad feedback are the goal.

If you can’t test it, there isn’t any real value. The testers need to touch it and feel like it’s a real world situation.

3. Words are worth a thousand images.

Write your copy first, it matters very much. Then you can make the images fit with the rest of the prototype.

4. Focus on the flows and scenarios

5. Prototype only what you need

6. There is no high fidelity or low fidelity only the right fidelity.

Make it as nice as it needs to be. A sprint is a fixed amount of time, so some things will have to be a trade off.

🗝 7. Don't get emotionally attached to the prototypes

These are tools for testing like a scrape of paper to guide you some elements will be kept some will be changed and some will be tossed out.

8. Kill ambiguity and get on the same page

10. Make prototyping the cornerstone of your design process

You can prototype at each stage. Many people think of the flow as this:

Whereas it is better to think of it like this:

I hope that is as useful for you as the meeting was for me.